In the ancient Egyptian capital, Memphis, Aïda, an Ethiopian princess is held captive and is a slave to Amneris – daughter of the King of Egypt. Aïda keeps her royal lineage secret. Both women are in love with Radamès – who is made supreme commander of the Egyptian forces – but he only has eyes for Aïda. The King offers Radamès the crown of Egypt and the hand of his daughter, if he succeeds in conquering the Ethiopians. Returning triumphant, Radamès brings with him a representative group of prisoners, amongst whom Aïda recognises her father – Amonasro, the Ethiopian king. He begs her not to reveal his identity.

Appealing to Aïda’s patriotism, he persuades her to elicit from Radamès, details of a route the Egyptian army will take. Blinded by her love, Radamès gives up the information and is overheard by Amneris. She denounces the traitors, but Aïda and Amonasro flee as Radamès gives himself up to the guards. The leaking of military secrets carries the death penalty, but Amneris offers Radamès his freedom in exchange for love and marriage. Still besotted by Aïda, he refuses and is buried alive. As the air in the tomb is used up, Radamès finds he is not alone; Aïda is there with him. As they suffocate in one another’s arms, Amneris is left alone to mourn the man she loved.

In its 40th anniversary year, Dorset Festival Opera demonstrates impressive standards in this full-scale production of one of Verdi’s grandest works. Aïda is one of two major pieces the company – whose activities have expanded considerably under its artistic director, Roderick Kennedy – performs this season; Fidelio is also in the repertory.

Designed by Steve Howell, Paul Carr’s staging of Verdi’s ancient Egyptian opera is broadly traditional… there’s grandeur and colour in the sets and considerable energy in the work of the substantial chorus… their singing, under the direction of chorus director Nicholas Mansfield, is brave and bold – as it needs to be in this opera.

Strong work, too, from the principals, even if a couple of them – Suzanne Manuell’s Aïda and Arnold Rawls’ Radames – need to do further work on their basic stagecraft – at moments, both look physically lost. Vocally, they are much stronger, each with the potential to reach considerable heights in their respective roles. …Antonia Sotgiu’s Amneris manages the regal manner and sings with dignity and power.

Leading the field among the four principals is Mark S Doss as Amonasro – a thrilling stage performer who wastes no opportunity to advance his character and sings with vehemence, he is the star of the show. Among the secondary roles, Jean-Loup Pagèsy makes an emphatic King and Charlotte Hewett sounds ideal as the Priestess. Maintaining high musical standards throughout is conductor Jeremy Carnall, who brings dynamism and insight to his task.

The result is a production of national rather than merely local appeal.

…Dorset Opera celebrated its 40th anniversary this year. It has been a valiant enterprise, mainly staffed by volunteers but presenting, over its history, a selection of standard (and not so standard) titles each summer, including the first UK peformances (or at least first UK stagings) of such pieces as Gomes’s Salvator Rosa, Erkel’s Hunyadi Laszlo, Berners’s Le Carrosse du Saint-Sacrement and Donizetti’s Maria Padilla, as well as the world premiere of the same composer’s long-lost Gabriella di Vergy; in addition, in 2007 it presented the first UK staging of Berio’s completion of Turandot, in alternation with Alfano’s standard version.

Founded by the late Patrick Shelley back in 1974, the company has enjoyed something of a resurgence in recent years, due to the ambitious initiatives of the current artistic director, Roderick Kennedy.

Aïda is both a gift and a challenge to such an enterprise; if the opportunities are big, then so are the pitfalls. Paul Carr’s production largely managed to maximize the former while avoiding the latter. Steve Howell’s sets and Rebecca Hopkins’s costumes offered an essentially traditional view of the work.

Suzanne Manuell’s Aïda was dramatically tentative, though she sang the role ably and with some imagination. As Radames, the American tenor Arnold Rawls often looked physically at a loss, but his voice encompassed his role’s needs and more… Antonia Sotgiù’s Amneris offered vocal potency and stage flair, though her smile of regal triumph was just a little overdone.

Easily leading the field was Mark S. Doss as Amonasro, who missed no opportunity, vocal or physical, to advance the interests of his characterisation in what was altogether an outstanding performance.

Among the secondary roles, Jean-Loup Pagèsy’s strong King and Charlotte Hewett’s beautifully sung High Priestess both made an appreciable mark. So, too, did the orchestra and the chorus (clearly well trained by Nicolas Mansfield and Kelvin Lim), the latter rising to each and every challenge that Verdi throws at them. The conductor Jeremy Carnall provided a consistently dramatic reading of the score, highlighting its detail while maintaining a steady impetus.

In a year when the focus is on war – the centenary of the start of World War One, the continuing and escalating conflicts in the Middle East, Iraq, Afghanistan, the Ukraine – Dorset Opera has chosen a battle themed opera for the first production of its 40th anniversary season.

Paul Carr’s production for Dorset Opera, played on a splendidly gilded but simple staging designed by Steve Howell, makes the very most of the Bryanston stage.

One of the excellent Dorset Opera’s distinguishing features is its work with a chorus of singers and chorus master Nicolas Mansfield’s work has never been more impressive than in this grand opera.

Suzanne Manuell not only has a beautiful voice but captured the torment of the slave…Antonia Sotgiù was convincing as the manipulative and frantic Amneris, with Mark S Doss returning to Dorset Opera with a charismatic and powerful performance as Aïda’s father, Amonasro.

Local singer Charlotte Hewett had her first big role with the company as the High Priestess, and Jean-Loup Pagèsy was the impressive King of Egypt.

On the opening night Arnold Rawls took over from Lorenzo Decaro as Radames. Mr Rawls has a fine voice.

In its 40th year, the Dorset Opera Festival is more popular than ever with acres of excitable opera fans flocking to the balmy opening night of Verdi’s Aïda. In the heaving auditorium, the heat is almost visible and amongst the fluttering fans of overheating spectators, we are plunged most realistically back into Ancient Egypt.

Designer Steve Howell has remained true to the concept of traditional ancient Egypt and the splendour of the pharaohs.

In this colourful and powerful production, the principal performers all shine. …Antonia Sotgiu’s Amneris is flirtatious, regal and suitably vicious as she manipulates Aïda into revealing her heart’s secrets.

But it is Mark S Doss as Aïda’s father Amonasro who has our undivided attention. He attacks the role and places himself in the centre of the production. He is well matched with Suzanne Manuell as Aïda. …Arnold Rawls’ performance of Radames delivers powerful and stirring vocals…

…the chorus’s contribution in conducting the many seamless set changes and filling the Egyptian royal courts with their collective energy, makes this a vibrant ensemble effort.

Jeremy Carnall too, whose wiry and energetic conducting infuses the production with a fizzing energy, elevates Aïda above the local stage on which it sits and raises it onto a stage of national operatic quality. 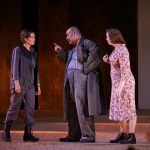 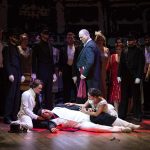