A conspiracy is afoot to assassinate fun-loving governor, Ricccardo. He loves Amelia – the wife of his first minister and best friend, Renato. The court has banished the fortune-teller, Ulrica, but Riccardo wants to know if her skills are genuine. He and his supporters dress up as sailors and fishermen, and seek her out. Suddenly, Amelia arrives for a consultation. Riccardo overhears Ulrica tell Amelia that she must collect certain herbs near the gallows at midnight, and he vows to be there.

The conspirators follow Riccardo to the gallows, but Renato arrives and persuades Riccardo to escape, offering to take his place and escort the disguised woman back to her home. Renato discovers the deception, and in a meeting with the conspirators he wins the right to kill Riccardo himself, at that evening’s masked ball. With his dying breath, Riccardo assures everyone that his love for Amelia remains unrequited.

While Dorset Opera, with a fair wind, is just about doable in a round trip from London, the 41-year-old festival clearly has a strong local presence. The setting, in the grounds of Bryanston School, is beautiful, the atmosphere informal, and the director Roderick Kennedy is an affable omnipresence. It is all due to his energy that such a high standard is achieved, with a run of three performances each of two operas (plus Rossini’s Petite Messe Solennelle in Blandford Forum Parish Church).

By comparison (to L’elisir d’amore), Paul Carr’s production of the Boston version of Verdi’s Un ballo in maschera was a more stagey affair, with the sort of ambition that got in the way of the opera’s impact. Steve Howell’s fixed set showed massively blown-up photographs of a grand opera house, with a comic-book giant splat of blood on the floor centre stage. The setting was the 1920s, with Riccardo as a Mafia-style gangster capo, with a court of silent assassins dressed as undertakers. Rebecca Hopkins’s costumes made a thing of black and white contrast. A suspended corpse dripped blood onto the ‘orrido campo’, lit by a blood-red moon. All very expressionist, and there was the annoying anachronism of assassins wielding swords. It was certainly a bold gestural staging, but one with melodrama overload.

The Mexican tenor Luis Chapa have more than enoygh power for the spivvy Riccardo. His top range, though, sounded pressured, supported by a vibrato too big for the theatre, and there wasn’t much chemistry between him and his best friend’s wife. A larger theatre would also have suited Claudio Otelli’s Renato very well, especially so in the powerfully staged Act 3 scene with Amelia. She was played by the Russian soprano Svetlana Kasyan who showed off her prodigious vocal strength, but her pitch wavered high up, not helped by a vibrato that was as unsubtle as her acting. Rosalind Plowright played the ‘psychic’ Ulrica as all the Madame Arcati’s you’ve ever seen rolled into one and was unstinting in her even, full-voiced declamation. Elizabeth Bailey’s Oscar was suitably androgynous, but her soprano didn’t have the brilliance to do full justice justice to her music. Gavin Carr’s conducting sided with the staging in terms of drive and drama, and the chorus, rather amorphously directed compared to Elisir, was vocally on top form.

The second DO production for 2015 was Verdi’s darkly difficult work Un ballo in maschera, its story based on a real event in Swedish history, and here transposed to America.

Riccardo, Earl of Warwick and Governor of Boston, is much loved by his people, but he has attracted hatred and fury by those he has deposed and abused. His personal tragedy is to have fallen in love with his best friend’s wife.

Paul Carr’s production, set against the goldfish bowl of a monochrome theatre facing the auditorium to increase its intensity, is full of danger and torment. Effective lighting, particularly in the gallows field scene, added to the escalating aura of doom.

Circled by plotters mingling with his loyal and loving subjects, Ricc­ardo (Luis Chapa) basks in adulation, tortured by guilt at loving Amelia (a stunning Dorset Opera debut for the young Russian soprano.)

There were many powerful scenes in this production, but a lack of chemistry between Riccardo and Amelia – who hardly looked at each other – undermined the personal tragedy. There was a much stronger connection between Amelia and her husband Renato, played by Claudio Otelli, who embodied this noble character torn between loyalty to his friend and jealousy at his wife’s apparent infidelity.

Sr Chapa also had the distinct disadvantage of a costume that made him look somewhere between John Travolta in Saturday Night Fever and a flashy snooker player, incongruous in an otherwise subtly costumed production.

One impressive directorial idea was the almost constant presence on stage of the top-hatted, black-clad assassins, heightening the tension from the opening scene.

Rosalind Plowright, making a welcome return to the Dorset Opera stage, was simply terrific as Ulrica, the sorceress (here, a psychic), and Elizabeth Bailey was a delightful Oscar, singing her witty and enchanting songs blissfully unaware of the dark drama unfolding around her.

Dorset Opera has to find works with sufficiently large chorus requirements to suit its summer school ethos. However, in this production that led to some uncomfortably crowded scenes that would have benefited dramatically from smaller numbers.

Overall, with the calibre of soloists and musicians, this year’s Dorset Opera Festival reached even higher standards. Under artistic director Rod Kennedy, this has become one of the summer’s most anticipated (national) musical events.

Next year, opera lovers can look forward to Dorset Opera tackling one of the masterpieces of the Russian repertoire, Eugene Onegin, as part of the festival, from 26th to 30th July 2016. The second opera will be announced in the coming months. 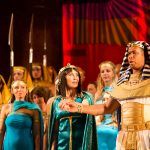 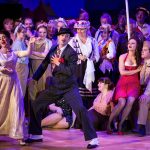