Schubert’s Winterreise is a collection of songs upon the theme of lost or unrequited love. It is a dramatic monologue, lasting a little over an hour in performance.

Our protagonist’s belovèd has fallen for another. Grief-stricken, he wanders away from his town at night, coming upon the charcoal burner’s hut where he rests. Isolated and bereft, he travels on, finally arriving at a cemetery where, denied even the death he craves as release, he angrily renounces his faith before reaching a point of calm. Finally, he meets a street musician whose ominous nature and message leave our wanderer’s fate open to interpretation.

Winterreise is one of the absolute fundamentals of the German Lied, which strongly influenced not only the style but also the vocal method and technique in German classical music as a whole. 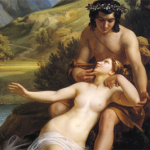 Acis and Galatea2021, Past Production